Seems like Autumn on Baldwin Acres is going to be wet, dark, damp, wet, dark and also, damp. With daylight savings time now in full swing, we’ve had to make a few adjustments for the lack of sun and the abundance of wet. In the summer the sun sets around 9:30ish, today it set at 4:48.

this photo is not Baldwin Acres, it is the place we go Salmon fishing every summer, Sekui, Washington. But, this picture does show the gray mistiness that is the reality of our Autumn

We’ve learned a few things. Did you know, for instance, chicken egg lay production slows unless they have light.  So we’ve added extra hours via a low watt bulb in the coop. It’s on a timer and adds three hours of ‘sun’ in the am before the real sun rises. We’ve also added more pine chips to the floor, going for the deep litter method of cooping. Which, from what I’m reading, you put six inches of pine chips on the ground then the chickens kick it around and it breaks down along with any organic waste and becomes somewhat like dirt, which you shovel out in the spring and add to the compost. 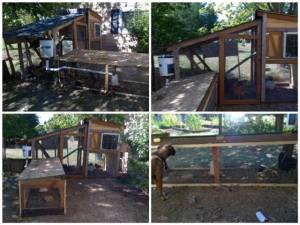 This is the girl’s place with the new extended chicken run and automatic water feeder. The extended light is where the nesting boxes are in the top enclosed area.  We’d read during the summer we should use sand as flooring. So, we did. Now, I’m not sure if sand is a great idea in such a wet season because the chickens are mighty muddy. Thus the reason for adding six inches of pine shavings.

Another development on the Acres is the discovery that the male goat we were told was a whether (neutered) is actually a buck. Buck goats are an entirely different animal (yeah, I said that). What I thought was just weird behavior is actually male buck goat mating rituals. They include urinating on himself, wagging his tongue, curling his lips, making crazy eyes and then there’s the mounting of the two female livestock we have. It’s not pleasant. But along with the livestock comes added cost in the winter : the pasture has no new growth, so more alfalfa, sheep chow, mineral blocks (which dissolve in the rain). Such is the life of a flerd owner (flerd: noun, combination of a herd and a flock).

The garden beds sparsely dotted with herbs, carrots and radishes show puddles of rain. All the Japanese maples, sugar maples, oaks, willows and orchard trees are just about naked. This starts the dark and dreary seasons, I reckon. Good thing the important stuff in life doesn’t get watered down or puddled up: faith, family,  friends, fireplaces,  cozy sweaters and warm waterproof Bogg boots.