When Tumnus first came to us, we considered him a rescue goat. We were asked to home him and a female Kinder goat and two Jacob sheep from a family who thought they could have livestock even though their neighborhood covenants said no.

We pretty much didn’t know what we were doing when we bought them. Except we were helping someone out. Tumnus was described to us as a wether. A wether is a goat who has been castrated. Goats and sheep are herd animals, and oftentimes people will have a wether to keep the other animals company.

Tumnus, whose name always seemed too big for him. was particularly endeared to me and I to him. I shortened his name to T man or Mr. T. He would rub his head against me whenever we were in close proximity. He always responded with a low bleat when I called his name.

But, T always seemed a bit off. His hooves seemed misshapen and needed more attention than the other members of the flerd. When he had been dis-budded, they had missed a small portion that sometimes doesn’t show up until the goat is older and he developed scurs. Which means although dis-budded, a little portion still grew into his head. They say you can re-do the dis-budding process but we have no iron or experience. And, honestly, I didn’t know this was the problem with his horns until a recent research project.

One day, after we homed him, T stood off and peed on his face. As I mentioned, we had no experience with livestock before this, including reproduction, or social behavior. So, when he urinated on his face, peeled his upper lip back as if the odor was  magnificent, then stuck his tongue out and wiggled it, I told Lance I thought T might have a mental issue. After researching it however, T’s mannerisms were the exact way goats woo the ladies. Which brings up another issue.

T was supposed to be castrated. There would be no reason for him to do any sort of mating ritual. No peeing on his face, or bellowing, or sniffing the femailes. After a cursory investigation, we discovered T still had a testicle. So, he either had three, or they missed one.  Sadly, this one testicle was enough to keep him in a continual state of mating desire.

When the males get like this, not only do they pee on themselves and snort and stick out their tongues, they vocalize their desire. When our granddaughter had to describe the word,’bellow,” her descriptor was Tumnus, and the picture she drew was of T opened mouthed, neck stretched out towards our female goat’s rear.

The first time we heard his too human hollering was late at night. The pasture is just outside of our second story bedroom. We sleep with the window open. I heard, ‘Hey,’ in a what I thought was a man’s voice. “Heeey,” again. I woke Lance up and told him there was a man in our yard. he listened for a minute and again, “Heeeyyyy”, was said. So Lance ran outside while I tried to light up the pasture from the bedroom window with the flashlight. “Heyyyy”. Then Lance called from the shadows, “You’re not going to believe this.” He laughed. “It’s, Tumnus!” What we didn’t know was this behavior would go on indefinitely.

In the spring, our wether Jacob sheep with his immature but sharp horns, our Nubian goat with his big horns and our male Jacob sheep with his magnificent horns, and T with these horrible looking nubby areas, would engage in rutting. There were many bouts of ramming each other in the heads. Poor T got the brunt of the battles. With just enough testosterone to embolden him, he readily engaged in every challenge and his head would bleed. Eventually his body became dotted with bloody holes, as if he’d been stabbed with round spears.

We don’t have enough acreage to separate him from the others, and if we did, he would be alone, which we were told to not do. Finally, with severely bad front hooves, holes down the back of his neck from rutting, his constant state of heightened arousal and the bashing his head was taking, we decided it would be better for him to remove him from the flerd. Permanently.

This is still troubling for me to discuss. I know people eat goat, even my people in Jamaica consider the goat as we do cows. Goat meat is used in dog food,  goat hooves, goat horns all are used by some.  I have eaten goat only once. And, I’ve never used goat for anything else. The idea is still rather foreign to me. Some people might wonder why we didn’t take him to the vet, but understand, in this homesteading venture, we live on a tight budget. There’s not a lot of room for extras. If an animal is not producing we’re going to cull it. We did the same with some turkeys this year,too.

One reason we raise our own poultry and pigs is to have healthy food. Food we know what has been fed, how it’s been raised and will be good meat for our family. But, still it’s hard to say good bye to my friend.

Thus the reason I wrote this. Even if no one reads about T-man, I do tribute him with love, respect, apologize for his tough life and thank him for the meat which did nourish our dog and barn cats and a little bit to human consumption.

T-Man, you were loved.

Except for Christmas, winter is not my favorite season. I think we must be on day 427 in a row of rain and gray skies. The back pasture has flooded at least twice. The pig sty looks like,well, a pig sty.  The damp coolness plays and pokes at my joints and muscles, and my hair is in constant need of a hat. Winter and I do not get along.

When you don’t get along with something you can either live in misery and complain about the situation, which admittedly I do from time to time, or you can look for the good. the old making lemonade out of lemons idea.

This winter scene is pretty. Snow makes the scenery a little more beautiful. This is our raised garden and small orchard area. This doesn’t fit into my winter blah scenario because it is lovely, lasts only a while, and allows a little respite in activity. 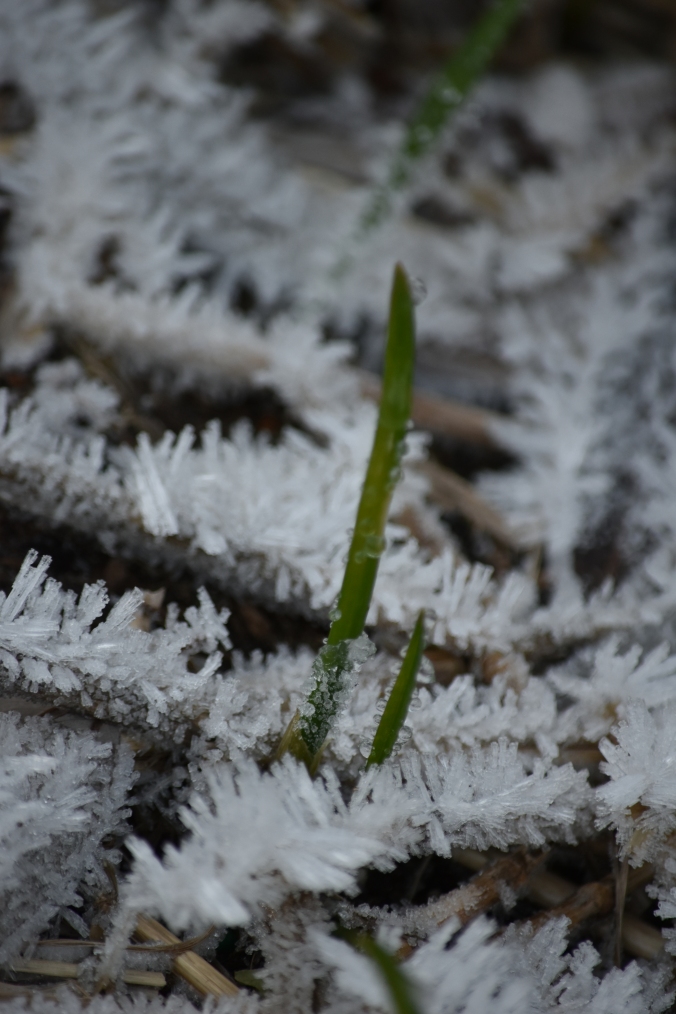 This is a close up one of the garlic beds. The white stuff is not snow. They are ice spikes. We had so many days of freezing cold and rain, that these ice spikes adorned all our vegetation.

Here is a picture that sort of shows the mess I’m referring to in the back pastures. The tractors have stopped work for a while, because the ground is boggy. The area is spotted with puddles and little streams of water. To the left of the barn is the pig sty, in the barn is our supply of alfalfa and our livestock nursery. Currently Pork is housed in there, waiting to give birth to little piglets. To the right of the barn is the feeding area. There’s a tub for grain and an alfalfa feeder on the wall. We recently spread a ton of rocks in this area because the continual traffic of the  livestock (Jacob sheep and kinder/Nubian goats)  really has churned up the mud. A person (me) could (has) get stuck in that muck.

When it rains, if you’re not out in it, not mucking out poop, or tending to animals, but maybe just observing the landscape, it can take your breath away. Or at least let you appreciate God’s creation.

These beautiful water fowl (ducks) take advantage of the winter pond. This area completely dries up in the spring and summer. But, it’s a nice treat to see wild birds taking a little rest here.

And, finally, I will appreciate the wet, mucky, season because without it there would be no spring. There would be no dormant time for the earth to recover, and the seeds to die, so when the spring sun warms the soil and dries the seasonal puddles and streams, we can grow healthy non- pesticide laden food and new livestock will be born. There is great contentment in the weariness at the end of a long homestead labored day.

The Bible attests to the need for seasons. Seasons not just for our homestead schedules, but also for our lives. Ecclesiastes 3:

There’s an opportune time to do things, a right time for everything on the earth:

I’m trying my best to live in each season. Because in the season is where we find life, purpose and hope.