Unlike real farmers/ranchers we didn’t get up at the crack of dawn and we retired before the sunset (but to be fair, our sunset was at 8:15pm) but we did manage to get so much squeezed in those hours we were out there. Between everyday chores, gardening, too many trips to Home Depot, Lowe’s, and Wilcox stores, it was a very fulfilling day. Thought I would share some of it with you.

We were happy to see the sheep, Lucy and Edmund, were awake and making small talk with our boxer, Remus, as they waited for us to take them to the pasture paddock. We had breakfast and took some of the Grands out to meet the sheep. Lucy and Edmund are a little shy and give us crazy eyes from time to time, but they are not aggressive or sketchy with the kids. Lance had to hold Edmund, the smaller of the two, so the kids could touch them, but the sheep are so foreign to the kids the petting was a fleeting action. After they got out to their paddock, E & L proceeded to do some yard maintenance. and we moved on with our very full day. 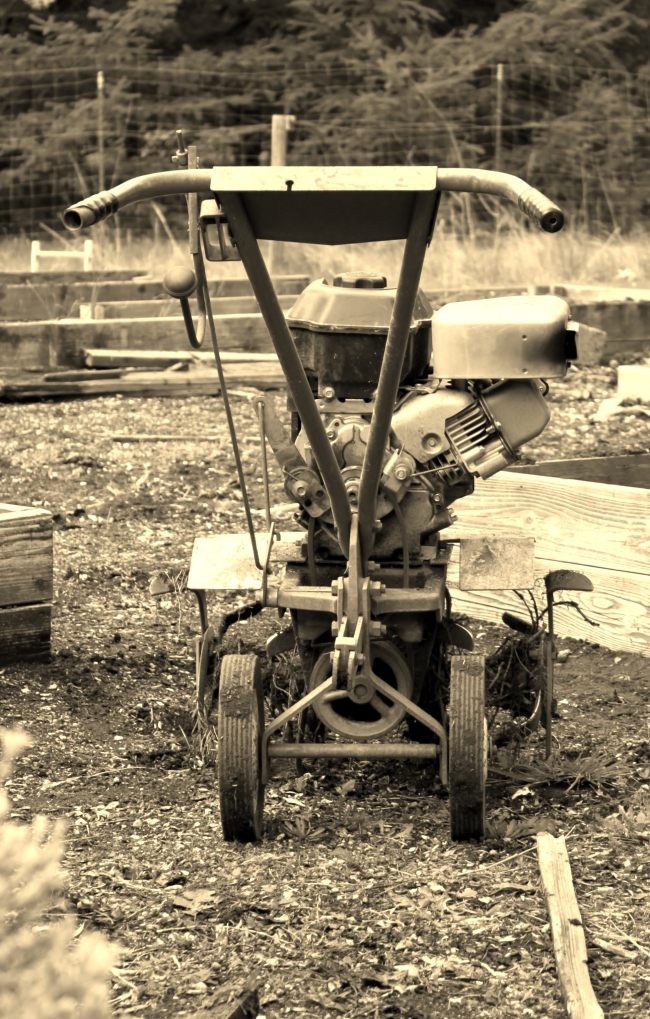 Lance tilled the garden beds. I planted a ‘salad’ bed with tomatoes, three different kinds of lettuces, and radishes. Yellow onions and Walla Walla sweet onions went in next. Cauliflower was next and then cucumbers into little dirt hills. Squashes – zucchini, acorn and delicate were next. One of the beds is now a dedicated strawberry bed, another will be for corn, and then pumpkins for October. One of the smaller bed will be for the herbs. The challenge of all this gardening is to not get down on my arthritic knees and at the same time, not wrench my back. Challenging, yes, but, ta-da, doable. 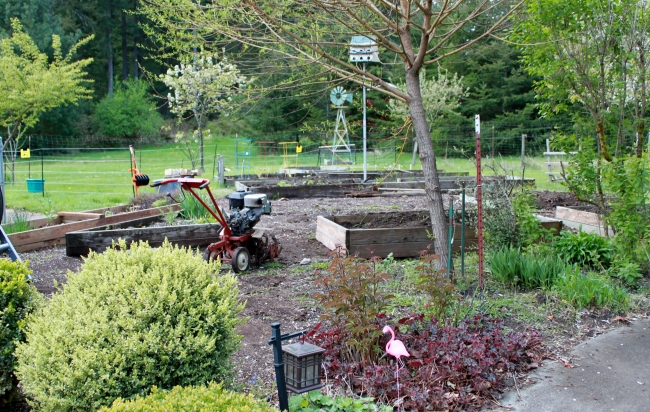 Today was also chicken coop cleaning day. Since last I posted we have lost one chick. She never seemed to grow, didn’t get any feathers and one day she was listless, the next day, dead. It was very sad, but it is the way God has made the creature world to work. in the picture below you can see how big her sibling is, the big white one in the forefront. Little one never got half as big. 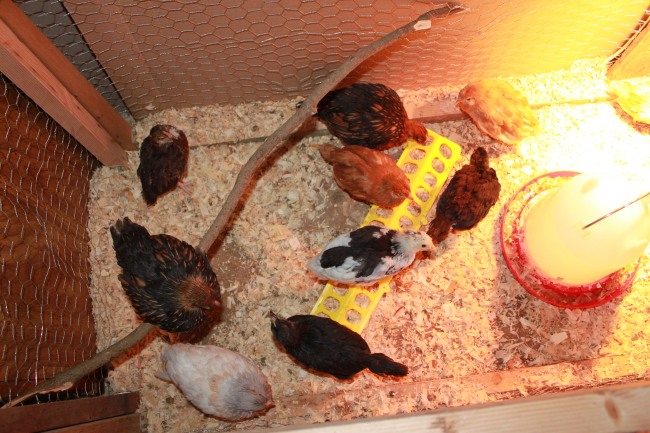 While I want to make a nice soft warm bed of pine shavings for the girls, they continually kick it out until it’s almost just bare board. See the shavings in their water?  This water had just been changed 10 minutes before I took this picture. They’ve also taken to sitting on their feed. Not sure why. There are two who often roost on the stick, but the others? Maybe there is not enough room? Or they’re only brave enough to be as high as the feeder. Maybe there is something to calling someone a ‘chicken’ when they’re fearful?

Setting up Baldwin Acres has been a costly venture. We have spent more money on the animals, their ‘stuff’ and their shelters then we have on previous sun drenched vacations. So far, it has been worth every cent. As I sit here typing (using nine fingers because I got one caught in the door while rushing to the sheep and it’s painfully swollen), my knees ache from kneeling only once, I’m exhausted, and my body protests when I get up off the couch,  I can honestly say, love every aspect of it.

Before we led Lucy and Edmund to their bedroom (a nice roomy fenced dog run with a shelter) for the evening, I got one photo of them which I sign off with for you tonight, too. Peace.

One thought on “Productive day = exhaustion, achy bodies and satisfaction.”