As our weather turns a bit warmer and a little more dry, we delight in spending more time outside. In addition to the farm chores – which, by the way are much more enjoyable doing dry than to tackle them while rain soaked, we also opened the pool, turned up the heater and had our first swim. The pool area bumps up against a piece of our property that is forested. On this particular day, the Man said he saw something furry scurry from the under brush. We had noticed the rabbits have returned, so we initially agreed that he probably did see something furry and it was, no doubt, a rabbit. Then, the little critter scampered out again. He was no bunny.

.
At first, we couldn’t figure out what the critter was. Not a bunny? No. A wild guinea pig? Is there such a thing? He certainly wasn’t a mole, or a groundhog. I grabbed my camera and took a few steps to the field where he gathered the weeds and waited for him to come. 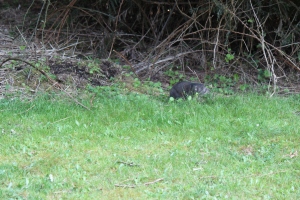 He or she, would race out and never stopping tug mouthfuls of weeds before running back into the brush. They don’t have pocket cheeks like chipmunks do, so they simply carry as much as they can and head back to the burrow. The burrows are incredible. They are so profuse they fell young trees because of root system disturbance. They can fell people too.When our little pig Pork escaped into the brush, we went searching for her. She was in the thick of the wild blackberries. As we walked on a patchy path, trying to see her little all black body in the shadows, my right leg sunk up to my knee into a hole. Startled, I ‘umphed’ and my son, who had been in front of me, turned and helped me out. The only thing that stopped me from going further was not that my foot touched the bottom, but that my leg got thicker than
the hole! Those tunnels go deep.

Although research tells me that the Mountain Beaver is as elusive as Jack-a-lopes, Bigfoot and Snipes, ours were not afraid of us at all. They took turns gathering weeds and taking them back to their tunnels. I moved positions several times and each time, they took no mind.

The Mountain Beaver is thought to be one of the most primitive rodents. So primitive they are the only ones from their species – Aplodontia rufa. They only have two to four young when they breed. And, of course, they aren’t beavers, and we don’t live in the mountains, but they do gnaw tree roots, bark etc. thus they’re named after Canada’s national animal. They are only found around the coast of Southern British Columbia, through Washington, Oregon into California.

We won’t be doing much with these guys. They won’t need their hooves trimmed, or their fur combed for fleas – although, interesting fact, the largest flea in the world, Hystrichopsylla schefferi, at 1/4 of inch resides only on the little guys. Our pasture is in sad repair some (because we had no idea what we were doing and now, a year into the venture, we know a bit more), so we’re happy to let them feast away on the banquet of weeds

We do have a few new ‘real’ farm critters to introduce. Bob, our beautiful Nubian buckling, Pork (2) and Beans our Kune Kune/American Guinea Hog pigs, 6 white Broad Breasted turkeys, 5 Royal Palm Heritage Turkeys, and Mic and Mac two adorable kittens who will be our mousers. Oh, we also have Roo. He’s a beautiful colorful rooster, but seems, perhaps, he doesn’t know what to do. Until next time….enjoy life, don’t let the turkeys get you down.

One thought on “New critters at Baldwin Acres. First, meet our Mountain Beavers.”