Anyone who follows this blog might think from the title that I meant I physically fell again…but nope…talking about the season this time!

Didn’t the end of summer came too quickly? While I was able to put up a few pints of tomato sauce (which look like tomato soup, but taste like tomato sauce) I didn’t get half of the canning done that I did last year. Most of the pear and plum harvests went to just eating and then to live stock. As did most of the apples. I did manage to bake a couple pastries and cookies but no jam, or apple pie fillings or pear slices like last year.

One of the biggest stories of our summer was the return of Pork 1 (now named Ollie) who had gone missing the day after we got her. Her story is elsewhere on this blog, but suffice to say, she’s back and happy with her siblings.

the swine of Baldwin Acres

the majority of our raised beds are  harvested. The fall garden is sparse. We were able to gather enough Scotch Bonnet, Habanera, and Jalapeño peppers to take to two local fire departments for their kitchens. We used our spaghetti squash on a family getaway, and we have a few big pumpkins and small squash  for October. The volunteer tomatillos came back but I’ve yet to figure out what to do with them. This year we’re also trying our hand at saving seeds. Did you know that you cannot save just any seeds? Well, you can, but unless they are open pollinating and non-hybrid seeds they won’t grow. (Lesson learned!)

Lessons…. we are continually learning something…animal husbandry, pasture management, and growing our own grains are just some of them. If we are not learning something, then we’re planning. For example, the garden has done much better this year so next year we will expand it. I’d like to utilize better the fruits from the orchard and the eggs from the chickens. It’s good that we didn’t waste any but I still would like to have some in the pantry.

Lance was able to get another tractor at an auction. This one has a back hoe and a shovel. It will be great help and alleviate some of the physical work he tackles on his own. I do help, but honestly, I’m not much help. He fenced our property, built the barn, and the livestock shelters pretty much on his own. Not to mention the gorgeous gazebo over the hot tub. (Life on the homestead is good).

Our venture with turkey’s showed us to do better research. We initially wanted an heirloom breed like we’ve done with our Kune-Kune/AGH pigs, our Jacob sheep and our goats. But, the local store had only BBW’s (Broad Breasted Whites). So we bought them. BBW’s have been so overly genetically mutated for their breast meat they cannot naturally breed. (In more ways than one we have managed to ruin God’s once perfect creatures). They are beautiful, but because they will suffer when their hearts rupture or their lungs collapse, their life span is short. 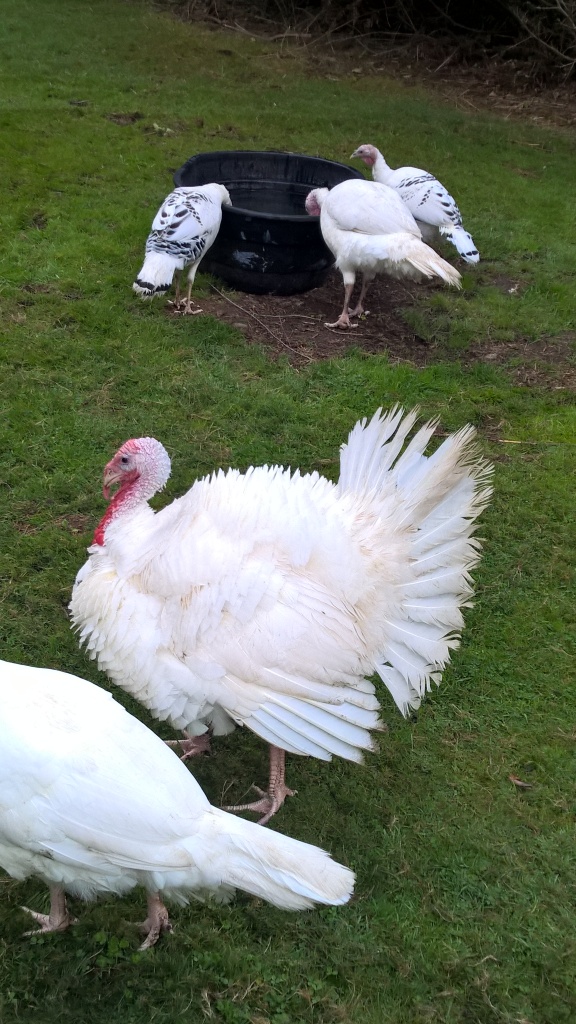 The first photo shows the Breasted white turkeys. The second shows the heirloom breed Royal Palms, drinking from the livestock water. All the animals seem to think the other animals have better water. Maybe they have fizzy water, or an energy shot? The livestock constantly tried to get in the turkey pen to drink their water, and when the turkeys come down to the lower pasture, they drink heavily from the livestock tank. None of them can get into the pig pen but when we fill the pool or their water dish, there is a gathering at the pig fence. You can almost see the drool.

We have tasted one turkey. Turns out turkeys aren’t very smart. We had just loaded a ton of hay up in the barn and I was driving the truck through the pastures while Lance walked ahead and opened and closed gates and kept animals where they belonged. When I momentarily parked, one of the turkeys sat under the trailer and when I pulled forward, I ran over her.

On the list for fall farm chores: trimming livestock hooves, vaccinating the barn cats, deworming livestock, and filling in the pasture that gets flooded in the winter. I will plant garlic and oats for our winter crops and start planning for spring.

I like the seasonal changes in the homestead. Each one has both a beginning and an end, life and death. I am so happy the Lord set us up here. Life is challenging, but always good 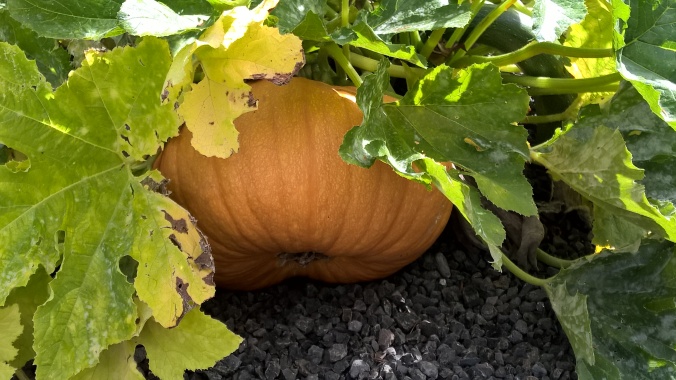